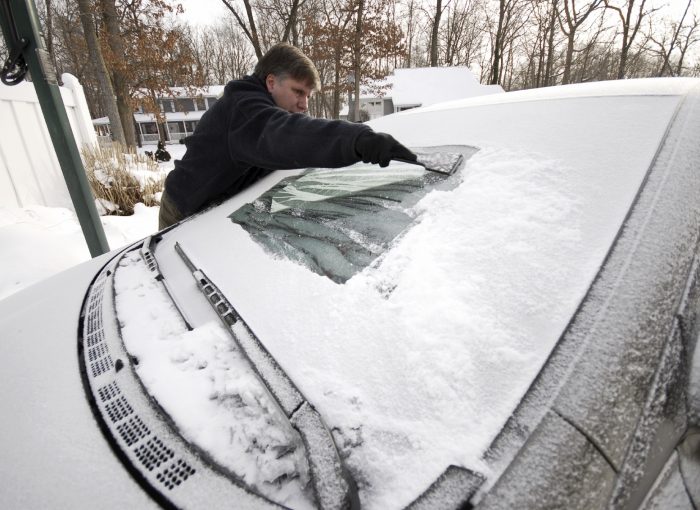 It’s that time of year when you can either scrape the ice off your car’s windows or spray a de icer on to melt it off. But it’s true that some products are bad for car paintwork.

How does de icer work?

What makes a de icer bad for paintwork?

All sorts of chemicals attack car bodywork. Some people claim that de icers containing sodium chloride and/or calcium chloride are fine for a car’s paintwork. That’s because these are essentially naturally occurring chemicals, otherwise known as salt.

They say that the salt in them is so diluted it makes them harmless to a car’s paintwork. Others counter that salt in any quantity is bad for a car’s body.

One thing’s for sure, products that contain chemicals like ammonium nitrate, carbamide, potassium chloride and magnesium chloride should be avoided when it comes to de-icing a car. That’s because these can corrode bodywork, glass and rubber seals and be harmful to the environment.

What can you use instead to melt ice?

Ideally you want something that isn’t going to attack paintwork, something that chemicals are very good at doing. Specialist insurer Carole Nash recommends making your own de icer. As with screenwash, this involves using rubbing alcohol or isopropyl. This has a freezing point of -89 degrees Celsius so you can water it down. The insurer recommends two to one, but you could do one to one, then put it in a spray bottle and you’ve got your own de-icer spray.

Some people swear by vinegar. Again, the theory goes this will raise the freezing point of the ice so that it melts. In fact, it won’t. What it will do, if you spray it on the windscreen before it gets ice on, is make it harder for the ice to form a bond with the glass. That makes scraping it off much easier.

Although vinegar is ascetic acid, it’s too weak to damage a car’s paintwork.

What about shop bought stuff?

The thing people seem to have against shop-bought de icers is that they’re full of chemicals that are bad for the environment. That is quite possibly the case but let’s face it, driving a car in any form isn’t brilliant for the planet. And in this country, how many times a year will you use a de icer? A handful?

Which is the cheapest way to de-ice a car?

The shop-bought, possibly-environmentally-harmful products, cost around £5 for 500ml (or £10 a litre). On the internet you can by pure rubbing alcohol for £3.29 for 50ml. To make up a 500ml bottle of 70% water/30% alcohol would cost you £9.87 for the alcohol. But that’s for the pure stuff, so you might be able to get a litre of effective mix out of that.

Alternatively, you could buy 500ml of 70% pure alcohol for £8.99. Mix it with the same amount of water and you’ve got a litre for £8.99. So, rubbing alcohol shades it in terms of pure price.