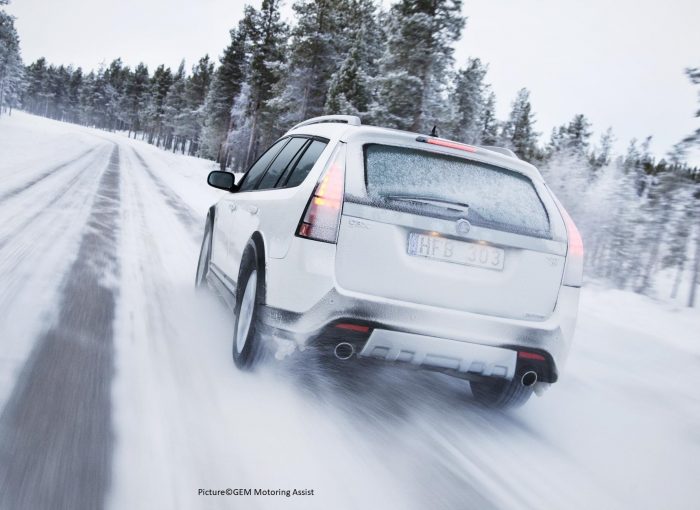 The weather’s getting colder and when temperatures fall below 7 degrees C, that’s when winter or snow tyres come into their own. But what if you don’t have winter tyres? Our reader wants to know about driving in snow without winter tyres on their car.

What’s the difference between winter and snow tyres?

Although winter tyres are often called snow tyres, they’re not. Snow tyres actually have little studs on them to help bite into snow.

The principle behind winter tyres

Winter tyres feature two things that regular summer tyres don’t have. They have a special tread pattern with slashes called sipes in the tread blocks. These help the tyres to bite into the snow. They are also made of different materials, called a compound. This is designed not to go too hard in cold temperatures, enabling the tyre to form some kind of bond with the road surface.

With neither of the above, summer tyres struggle to generate grip on snow. But there are some simple steps to take to give yourself the best possible chance of driving safely.

First check your tread depth. The more tread your tyre has, the more chance it has of finding some kind of purchase. Also make sure your tyres have sufficient air in them. Check the user manual, door pillar or inside the fuel filler flap to see what pressures the manufacturer recommends.

Think about the physics

A heavy lump of metal with four contact patches to the ground, each about the size of a postcard, will struggle to get going and to stop on a slippery surface. Take this into account and drive more slowly than you normally do, leaving a larger gap between you and other vehicles. Leave up to 10 times the usual stopping distance if the road is snowy or icy.

Make inputs on the steering and pedals that are as gentle as possible. If you can, start off in second gear, you’ll need plenty of revs but it’ll make wheelspin less likely. Some cars, particularly automatics, have a winter mode. If yours is one of them, use that. It’s designed to optimise traction in cold weather.

For going downhill, drive slowly, use a low gear (second or third) and try to avoid braking. You don’t want to break traction with the road. For going uphill, try not to change gear and go at a constant speed. Again, use second or third gear.

Brake before you get to a corner. Then turn the steering wheel very gently. Your car may not follow the front wheels. If that’s the case, don’t keep winding steering lock on, you want your steering wheels to be pointing in the direction you want to go in.

What if you skid?

If the car starts to skid, steer gently into it. If the back of the car swings out to the left, turn the steering wheel to the left. This should mean that rather than spinning, the car will keep going roughly in a straight line.

Most importantly, if you feel the car starting to skid, don’t brake heavily. There’s every chance it’ll make things worse.

Think about chains or snow socks

Snow chains are metal chains that surround the wheel. You put them on the driving wheels. But be warned: they can be pretty tricky to fit so it’s best to practice before you need to fit them by the side of the road where it’s cold and wet.

Chains offer good grip in snowy conditions but you can’t drive quickly with them on.

Snow socks are like fabric bags that fit around the driving wheels. They’re much easier to fit than snow chains but they don’t give as much grip, particularly in deep snow.